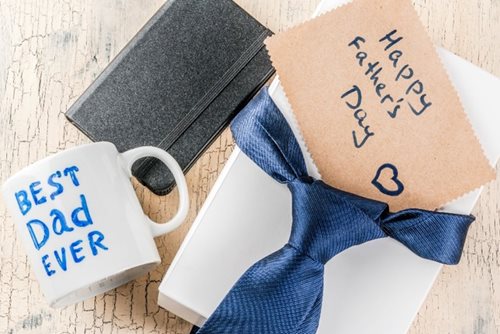 The month of June is named after Juno the Roman goddess of marriage and, until recently, the most popular month in the calendar for weddings.  For many, it heralds the start of the summer holiday season as it offers the longest hours of daylight in the Northern Hemisphere.  It also marks Canadian Rivers Day, Global Running Day and Father’s Day.

The latter is still struggling to gain the recognition and spending that are involved with Mother’s Day. This despite the appreciation of fathers having a long and important history.  In some parts of the world it is closely associated to the Feast of Saint Joseph (the legal father of Jesus Christ). This celebration can be traced back to the 5th Century in the Coptic Church and the 14th Century in the Catholic Church.

The non-religious tribute is a 20th Century occasion that grew out of the need to compliment Mother’s Day.  The focus of the day is to celebrate fatherhood and the paternal bond within the family.  In recent decades, it has also grown to honour fatherly figures, including stepfathers, grandfathers and uncles.

In the family unit, fathers are rarely regarded as highly as mothers when it comes to intimacy and admiration.  While attitudes are changing, it remains difficult to shake the stereotypes that exist.  Nonetheless, we should be willing to commend the many men who take their responsibilities seriously and every day try to become better fathers.

Social scientists point to the complex role that males have now been assigned.  They are expected to be the main bread winner and also urged to be involved in the family; they need to be compassionate and yet be the disciplinarian.  This emotional tug-of-war is an ongoing paradox that tests fathers every day!

As many have experienced, for generations fathers were expected to be stoic. Most likely your dad will be forever grateful for the effort you have made.  Even if he cannot say it, he will feel it!

Their role as head of the family required them to keep their emotions in check.

Thankfully, this is changing and we are coming to see parenthood as a partnership that sometimes extends beyond the nuclear family.  This has allowed fathers to redefine their role.

As it’s evolved so has the recognition of fathers grown.  That means Father’s Day is no longer consigned to the same level of importance as Canadian Rivers Day. While most Dads are in “the less fuss, the better” camp this should be a day when we look beyond this approach and seek t

Maybe the most important thing is to slow down.  Take time to reflect on an individual that has always been supportive. Even when you felt he was out of step, he did it in an endearing way.

Five Reasons to thank your Dad:

While your dad may not even be aware that Father’s Day is fast approaching it is a great opportunity for you and your family members to find ways to celebrate someone who has been an important role model.

A survey carried out last year found the majority of fathers (79%) did not expect a gift on Father’s Day but almost half said they would be upset if they were forgotten.

Collectively we do not spend as much on Father’s Day as we do Mother’s Day – something universally supported by all dads; but it should be a day when we try to give some extra time to the person who has been at the heart of the family.

Hanging out with dad is not just an easy gift to give him, it is probably the best one.