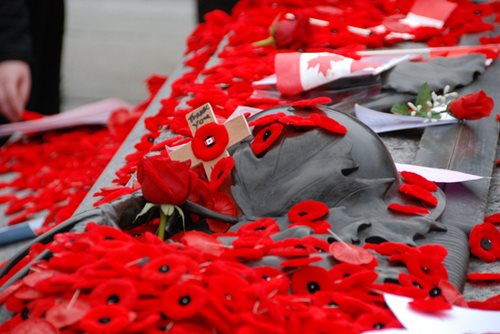 Remembrance Day in Canada: Why Do We Remember?

On November 11, 1918 at 11am, the most terrible conflict humanity had ever known until that time, World War I, came to an official end. It was called “the war to end all wars,” with the hope that the unimaginable tragedies witnessed across the world would never be repeated. Unfortunately, as we know now, that was not to be the case.

However, we continue to strive for a world without war. In Canada, we take the time to acknowledge this spirit with Remembrance Day, where Canadians reflect on those who lost their lives across the world in war, and remember what it was they fought for. There are several traditions associated with Remembrance Day, including the iconic red poppy many Canadians opt to wear on their lapels in November.

As we reflect on the conflicts in which so many Canadians lost their lives in, it’s also a unique opportunity to think about what Remembrance Day means, and where its traditions come from.

The History of Remembrance Day

In Canada, Remembrance Day is a statutory holiday in all three territories and six provinces. And while it is an especially important day for Canadians, it is honoured in many countries that were part of the British Commonwealth including the UK and Australia. In the United States, it is known as “Veterans Day.”

Originally, the day to reflect upon the sacrifices made in World War I was called Armistice Day, and was first observed in 1919 with King George V’s inauguration of the holiday. While Armistice Day was meant to commemorate the end of the Great War, many countries opted to change it to the more inclusive “Remembrance Day” following the end of World War II.

In Canada, this change took place earlier. From 1921 until 1930, the Canadian Government made it so that Thanksgiving and Armistice Day coincided, and would take place the first Monday during the week of November 11th. However, in 1931 parliament opted to amend what was known as the “Armistice Day Act” and standardize a new holiday, Remembrance Day, on November 11th.

There are a number of traditional observances undertaken by Canadians in honour of Remembrance Day each year. Notably, there is an official ceremony held each year in Ottawa at the National War Memorial presided over by the Governor General and attended by the Prime Minister. The ceremony is marked by bells, the attendance of multiple factions of Canada’s Armed Forces, a bugle playing “The Last Post” and a 21 gun salute.

Similar ceremonies take place across Canada in provincial capitals to remember the veterans who have lost their lives in global conflicts, and the ones who continue to risk theirs. At 11:11am, following the ceremonies, it is traditional to observe a minute of silence to reflect and remember.

In schools across the country, students also observe the moment of silence, in addition to assemblies which are meant to give children an opportunity to connect with the men and women who died in wars, many of which occurred before they were even born. It’s also an opportunity for actual veterans to attend school events so students can interact with real life people instead of simply imagining stories.

Perhaps most notably, during the month around Remembrance Day, many Canadians wear a red poppy pin on their lapels, signifying their observance and respect for the holiday. But where does the tradition of wearing the poppy come from?

A Canadian Remembrance Day ceremony would feel incomplete for many people if it didn’t include a reading of In Flanders Field, the poem by Guelph-born Lieutenant-Colonel John McCrae. It is this poem about Flanders Fields, and the poppies which grew “row on row” which made the poppy and its Remembrance Day symbolism so important.

McCrae was a gunner and medical officer who fought in the battle of Ypres, one of the most devastating conflicts of WWI, and the first where the Germans employed the use of chlorine gas. During this conflict, McCrae had to watch his close friend die, and he even performed  the burial service himself. It was here that McCrae noted how rapidly poppies seemed to grow around the buried bodies of fallen soldiers, inspiring In Flanders Fields.

John McCrae is said to have written the poem sitting in the back of an ambulance at an Advanced Dressing Station outside of Ypres. While the veracity of this claim remains unknown, according to friends who fought alongside McCrae, he was originally displeased with In Flanders Fields and tossed it in the trash, where it had to be rescued by fellow soldiers. McCrae’s poem was first published in the London magazine Punch on December 8th of 1915.

The legacy of In Flanders Fields has had a profound impact on Remembrance Day throughout the Commonwealth, particularly in Canada. It was considered the most popular poem published in 1915, and remains one of the most well known pieces of Canadian literature ever. It has subsequently been translated into French, and its reading is an absolute staple of Remembrance Day ceremonies across the country.

Remembrance Day is an important opportunity to reflect on the sacrifice of those who died in the horrors of war. Born after World War I, Remembrance Day has evolved to encompass a wide range of conflicts and remember the veterans from them.

This November 11th, you can join over 100 years of tradition in Canada and take time to think about those who fought before us -- lest we forget.