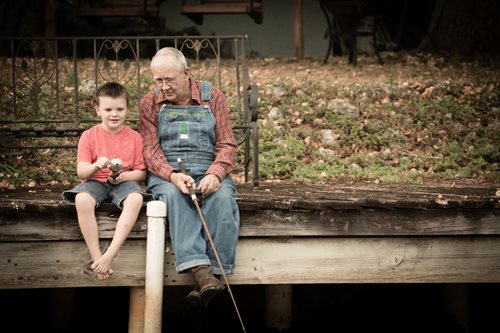 What makes a great father? While there’s no, one correct answer to this question, it’s fair to say a mix of compassion, leadership, patience and magnanimity often comes to define dads we look upon as great examples of fatherhood.

There’s no doubt that fatherhood which embodies the above characteristics is a wonderful thing. So wonderful, in fact, that some of history’s greatest Dads are remembered and celebrated dozens and even hundreds of years later.

This Father’s Day is an excellent chance to look back through time and see what made fathers great throughout the ages, and think of the great dads and granddads we know in our own lives. Here’s four great fathers from history:

One of the most famous rulers in European history, Charlemagne is commonly known as “The Father of Europe” -- but that’s not the kind of fatherhood we’ll be discussing presently. Charlemagne clearly enjoyed being a dad as he had over 20 children with his wives and many mistresses. While fathering a lot of children probably wasn’t that uncommon during that time, doting upon them was, and this was precisely something Charlemagne was known for.

A particular trait that defined Charlmagne as a Dad was his insistence on a good education for all of his children. Normally, this might be reserved for legitimate male heirs affiliated with the royal line, but Charlemagne insisted on extending this privilege to all of his children, even his daughters who at the time would have normally been denied any education at all.

One story about Charlemagne the dad stands out above all else, and is a good example of fatherly forgiveness. An illegitimate heir of Charlemagne named Pepin the Hunchback became embroiled in a conspiracy to have his father murdered and seize control of the throne. When his plot was discovered, under normal circumstances, Pepin would have been executed. But Charlemagne took pity on his son, sparing his life and sending him to live in a monastery. This may not seem particularly impressive behaviour for modern observers but to contemporaries, it was a sign of Charlemagne’s great forbearance towards his children.

Best remembered for his Lord of the Rings trilogy of novels, Tolkien also bears the distinction of being one of history’s most well regarded dads. His biography, as well as testimonials from his children, all recount a father who -- while titanically busy as a professor at Oxford and committed author -- always made time for his family.

This time often took the form of sharing family meals; after biking with his children (he had four, three sons and a daughter), Tolkien would return home to breakfast before setting off to work. He’d always return home for lunch though, where he’d make time to hear about his children’s day. To avoid spending time away from his family while writing, Tolkien would often be up into the wee hours of the morning creating his fantastical worlds, while his family was sleeping.

One anecdote that demonstrates the kind of doting dad Tolkien was is how he liked to display affection. Even when his children were older, Tolkien wouldn’t hesitate to give them a kiss in public -- much to their embarrassment!

Malala Yousafzai is known throughout the world for her courage and activism for women’s education. She is the youngest Nobel Prize winner ever -- and she credits much of her ability and confidence to the upbringing she received from her father.

Ziauddin was always a passionate public speaker who used his voice to be critical of the oppressive rule of the Taliban. He insisted that his daughter find her voice, and use it to speak and write about causes that were important to her. Ziauddin was very encouraging of Malala’s education in a time and place where girls were not frequently being afforded such opportunities.

In the introduction of her father’s book, Let Her Fly, Malala writes, “My father made me realize that my voice was powerful [...] I knew how to tell a story, I knew how to speak up.” Ziauddin remains very close to his daughter to this day and continues to support her globally recognized activist work.

It’s easy to think of exceptional leaders in history, but forget the people who helped them get to where they ended up. For Theodore Roosevelt Junior (the 26th president of the United States), he never forgot his upbringing and wrote at length in his autobiography about just how essential his father was to the man he became.

In fact, Roosevelt junior referred to his dad as “the best man he ever knew.” Here’s how he described Roosevelt senior in a letter in 1900:

“I was fortunate enough in having a father whom I have always been able to regard as an ideal man. It sounds a little like cant to say what I am going to say, but he did combine the strength and courage and will and energy of the strongest man with the tenderness, cleanness, and purity of a woman.”

During a time when many fathers opted to leave the more delicate side of child rearing to their wife, Roosevelt senior ignored convention to create a lifelong connection with his son, and raise one of the most famous leaders in history.

Looking to the past to instruct the future is considered a wise practice. And while much of history tends to dwell on stories of cruel fathers and the children who had to deal with them, there are also examples of wonderful fathers and grandfathers who can teach us lessons about what makes a truly great dad.

This Father’s Day, we can all take a moment to remember the fathers in our lives who have exemplified the greatest values dads can demonstrate.